End Of The Pier

by Sir Silence And The Hush 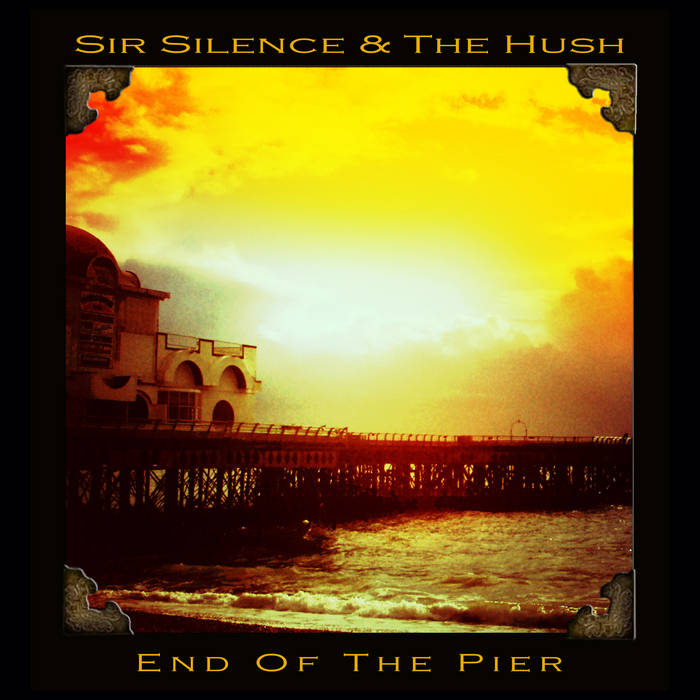 End Of The Pier, By Sir Silence And The Hush

On the 14th of March 2015, Sir Silence And The Hush are set to release a digital 4 track EP, End OF The Pier on Hushland Records.

End of The Pier EP is a collection of toe-tapping, post apocalyptic folk-rock-roots tunes that have drawn their inspiration from the imagined world of Charlie Hush, the main protagonist in Bill Taylor-Beales debut novel Kite.
The songs chart themes of ‘End Times’ both in terms of unending rain and devastation through climate change, as well a ‘tongue in cheek’ biblical narrative. As a character, Charlie Hush finds himself on the end of the South Parade Pier, with a hotel copy of a Gideon Bible and a pack of tarot cards conversing with the dead souls of those who accidently or deliberately never made it back to shore. He later finds himself to be a victim of a terrifying climate induced event creating a personal apocalyptic scenario to add weight to his many imagined versions. The lyrics are written from the perspective of Charlie’s world with his folk, rabble roots band.

Recorded, mixed and mastered by Bill and Rachel Taylor-Beales in their Hushland studio, the EP features an eclectic array of musicians including Paul Gray (former Damned/UFO/Eddie and The Hotrods) on bass.
Lucy Rivers provides violin and Stacey Blythe plays accordion. Their folk-roots melodies crossing over in dialogue and at times almost playfully jousting each other. Percussion from Shane Beales, and a guest appearance on tambourine from Melbourne based Kim Beales serve to make the collection into a family affair, with Bill and Rachel Taylor-Beales supplementing the rest of the instrumentation and vocal arrangements.

On the 14th of March 2015 Bill Taylor-Beales will be celebrating his 50th birthday and has decided to release End Of The Pier to coincide with this!
Please accept his invitation to join in the celebrations by downloading End Of The Pier from sirsilenceandthehush.bandcamp.com
(available from 14/03/2015)

Produced, recorded, mixed and mastered at Hushland Studios
by Bill and Rachel Taylor-Beales

Sir Silence AKA Bill Taylor-Beales has been making music for over 35 years both as a professional singer-songwriter and as a community musician. He has toured internationally and performed to major festivals both in the UK and in America. His community work has seen him working in prisons and hospices. ... more

Bandcamp Daily  your guide to the world of Bandcamp

Benji B talks about his new compilation ‘Deviation Classics’